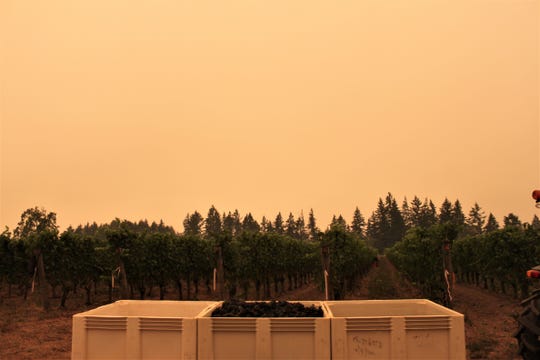 Thursday morning a crew of workers from Willamette Valley Vineyards harvested a block of Pinot noir grapes, destined to become sparkling wine, from a vineyard in Dundee. Overhead the sky was orange, hazy with wildfire smoke. Amador Silva wore a neck gaiter over his nose and mouth as he clipped clusters of fruit into a bucket.

The harvest had been delayed a day due to hazardous air quality. Winery director Christine Clair is learning, as are her peers at other area wineries, about AQI, the 0 to 500 air quality index measuring levels of health concern.

On Wednesday when they decided to move forward with harvest, she said, AQI levels were in the 70s, “moderate” in terms of air quality. “We felt as long as the pick was under a couple hours we felt okay about doing that.”

AQI levels for the day turned out to be 201 to 300, or “very unhealthy” conditions associated with increased risk of negative health impacts. 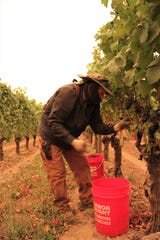 Clair noted that conditions change quickly, making it difficult to arrive atinformed decisions about harvest. Willamette Valley Vineyards has not scheduled any picks for next week, Clair said. “We want to see what the weather is doing.”

Oregon farm workers are facing a perfect storm of invisible perils as wine harvest begins and field harvests continue in the midst of the COVID-19 pandemic, now further complicated by hazardous air quality from wildfires burning throughout the Willamette Valley.

Despite Governor Brown’s state of emergency declaration and widespread evacuations, fieldwork activities continue. Determinations of what constitute safe air conditions for workers are being left to their employers.

Air quality throughout the Willamette Valley has ranged from ‘unhealthy’ to ‘hazardous’ in recent days due to the presence of wildfire smoke.

Smoke contains chemicals and fine particles, and breathing them can reduce lung function, worsen asthma and other existing health conditions, and cause coughing, wheezing and difficulty breathing. 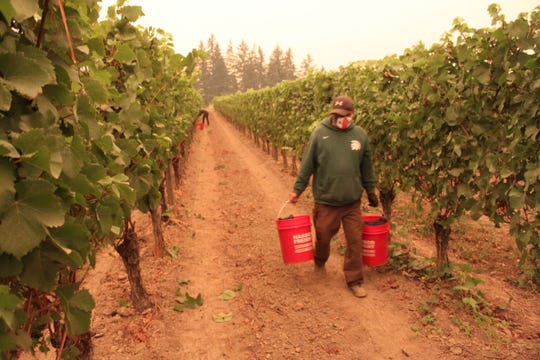 FIRE: Most of Oregon now has poor air quality as smoke sticks around

Agricultural work is strenuous physical labor often performed by workers with little access to health care, many of whom are guest workers or undocumented.

While Gov. Brown’s mask mandate to slow the spread of COVID-19 remains in place, cloth face coverings designed to block respiratory droplets don’t, according to the CDC, protect the wearer against harmful particles in wildfire smoke.

Face filtration devices, including N95 masks and respirators, offer some protection from fine particles, though due to the COVID-19 pandemic this equipment is in short supply.

Some vineyard managers are making efforts to reduce the physical intensity of grape harvest, tractors hauling bins directly between rows of vines to limit the distance workers need to carry the fruit. Still, each 5-gallon bucket full of grapes weighs between 20 and 25 pounds, and workers on crews paid piece rate (by the bucket) hustle up the rows carrying four at a time.

Following 2018 wildfires in Oregon’s Rogue Valley, Senators Jeff Merkley and Ron Wyden introduced a series of bills that included The Farmworker Smoke Protection Act to require employers to provide N95 masks or other certified respiratory protection, along with training and education, to farmworkers exposed to hazardous air conditions. The bill remains in committee.

In California, OHSA requires employers to take measures to protect workers whenever the AQI is 151 or greater. These include communicating wildfire smoke hazards in a form readily understandable by employees, adjusting work schedules or locations to reduce exposure, and providing smoke-appropriate respiratory protection equipment.

In a Friday letter to Gov. Brown and Oregon OHSA director Michael Wood, PCUN executive director Reyna Lopez said, “We’d like OSHA to implement guidance that would create clear instructions to employers for levels of fire smoke with a “no work” policy when cities and counties are at level 2 and 3 during wildfires.”

“We’d like OSHA to implement guidance that would create clear instructions to employers for levels of fire smoke with a “no work” policy when cities and counties are at level 2 and 3 during wildfires.”

The organization has been fielding inquiries from workers unsure of whether they should prioritize evacuation or report to work as usual.

“Thousands of them,” Lopez said, “showed up to work today despite level 2 evacuation reports in their cities.”

“I saw a farmer post a picture to Facebook that said look, these folks are out here with burning smoke in the background,” she said, the image depicting farm workers harvesting cucumbers. The message was one of the workers’ dedication.

The post was similar to those Clair has seen from winemaking colleagues, with what she called a “celebratory tone” about harvest beginning. This year, she said, the start of harvest means “we all have hard decisions to make.” 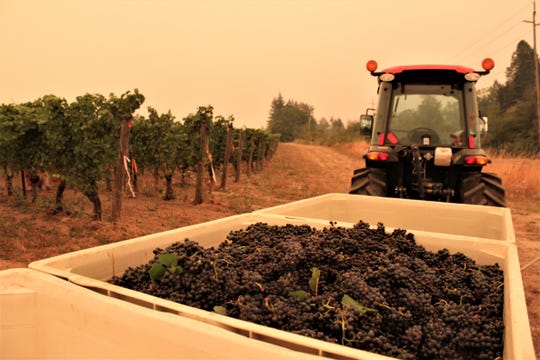 The first thing Janis Pate did when she woke on Saturday was check the AQI closest to Arlyn Vineyard, her property in Newberg.

“This morning at 3:30 a.m. it was 405 at George Fox,” she said, a reading well into the ‘hazardous’ range. “There’s nowhere in the entire area below 300, nowhere it was remotely acceptable. It’s horrible.”

Pate called her vineyard management company to cancel the morning’s harvest, already once rescheduled due to hazardous conditions, set to begin at 5 a.m.

“I said I can’t have the crew out there, I can’t have any of you. It’s not safe.” Pate said it was a challenge for the crew to accept they would be paid even for not working. “That doesn’t happen in our industry.”

The crew departed for their next pick of the day in another vineyard.  Canceling, she said, “protected them maybe for an hour, but they’re still going to work.”

At Arlyn Vineyard are between 25 and 30 tons of grapes ready, or nearly ready, to harvest and Pate is under pressure from winemakers to get fruit moving.

“For most growers, just the pandemic itself was enough to put you on the edge financially,” she said. “All of it is a lot for a small business.”

These factors may create an economic incentive for growers and winemakers to overlook air quality hazards, but “I couldn’t feel good about that. It’s wine, there’s no nutritional value.”

While there are various endeavors to support agricultural workers, including ¡Salud! an initiative that provides health care, Pate isn’t aware of a similar initiative that addresses the economic shortfall workers face if they can’t work, even if growers cancel harvests with worker safety in mind.

Navigating these decisions, Pate realizes, “it’s not enough to say we need to limit harvests. It’s a bigger conversation of how we look after seasonal workers. It’s not a choice to work or not work, it’s a choice of putting food on the table and paying your rent.”

“They wouldn’t be out there if they didn’t need to make ends meet,” said Lopez, “and if they didn’t feel that there would be a negative repercussion to them not being there. None of us want to be out breathing the smoke.”