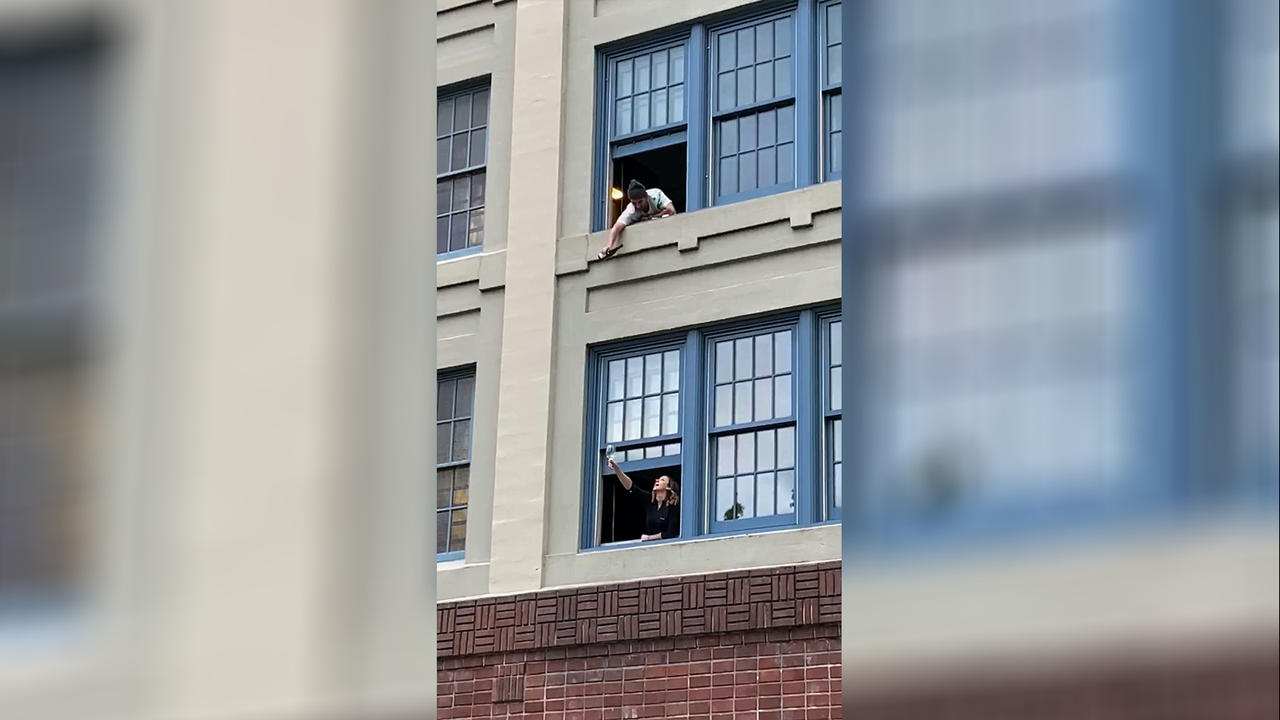 A Portland couple stumbled across what could have been a scene in a movie Friday night — a glass of wine being shared between floors of an apartment building.

Kim and Rich Williams live in Sellwood, but during the COVID-19 lockdown, they have been trying to support their favorite restaurants.

That’s what they were doing when they placed an order at Arden in the Pearl District and drove downtown. They were a little early so they decided to take a walk.

“It was eerily quiet walking around but we heard music,” Rich Williams said Sunday.

“That was really what drew us,” Kim Williams added, “all this music playing.”

It was 7 p.m. and people were loudly celebrating frontline healthcare workers.

“All of sudden,” Rich Williams said, “we see this guy and this girl out their window. He was sharing his wine with her.”

Rich Williams took out his phone to document the moment.

Nicole Hudson said she has been taking part in the now-tradition of making noise to support healthcare workers for awhile.

“I get too emotional with it,” she said, so she has a whistle she uses to make noise. It was loud enough that her upstairs neighbor yelled down to introduce himself.

Kirkland said even though he’s been living in the 100-unit building for seven months, he doesn’t really know any of his neighbors. But on Friday, during what he called “a unique unified moment,” that changed.

The two started chatting, out their windows, a floor apart.

“He goes, ‘Well here do you want some wine? I have some really good wine,’” Hudson said. “I looked at him kind of quizzically.”

He told her to go grab a wine glass and hold it out.

She did, and as he began to pour, the Williamses walked by.

“It was actually a pretty decent pour,” Hudson said, adding the wine was an Oregon white blend called Big Salt by Ovum.

Kirkland posted the video to Twitter. As of Sunday, it has almost 800,000 views.

As good as the wine and the moment were, however, Hudson and Kirkland want to emphasize that it’s really about supporting healthcare workers.

“This moment wouldn’t have been captured without the tradition of yelling out the window and supporting healthcare,” Hudson said.

Hudson and Kirkland are hoping to drive donations with viral video to Direct Relief, an organization working to get medical supplies and protective equipment to healthcare workers on the frontlines of COVID-19.

After filming the impressive display of wine pouring, the Williamses made sure to get Hudson’s information.

The couple said they told her, “We need to be invited to the wedding,” in case the wine pouring incident is the meet-cute in a real life coronavirus rom-com.

Is it a love connection?

“I am just happy to have a new quarantine friend and maybe a drinking buddy” Hudson demurred. “And he has good taste in wine.”

She’s trying to come up with a way to get a bottle of wine up to him, since her brother and sister-in-law own a winery.

“We feel a connection from 12 feet away,” Kirkland said. “We’ve been talking nonstop since yesterday.”

“People are invested a lot more than we had intended,” he said, adding, “Anything is possible. Wouldn’t that be cute?”

Rich Williams said he’s glad they shared the video. He hopes it gives people “a little lift” during these difficult days.

“It’s just amazing to see something like that in these times,” he said. “It was just a great connection. They weren’t together in the same place but they were having fun with it.”

Hudson said she thinks the video has struck a chord because of the happiness of the moment.

Kirkland agreed, saying it really all comes back to sharing support of frontline workers. Well, that, he said, “And I guess my excellent pour.”

Subscribe to Oregonian/OregonLive newsletters and podcasts for the latest news and top stories.