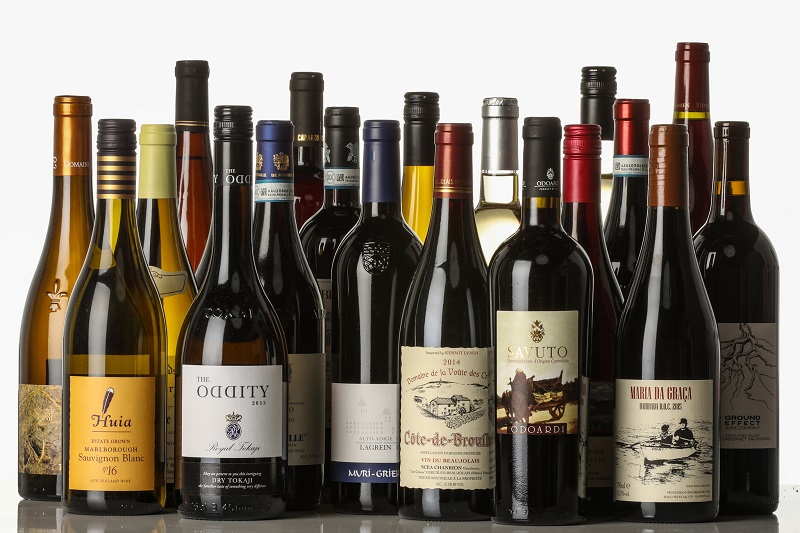 Wine types are based on the type of grape used in the winemaking process, although wine labels sometime refer to the region in which the grape was grown rather than the grape itself.

France is big on naming their wines after the grape growing region, and wine drinkers don’t much care which grapes are in the bottle, as long as the wine came from somewhere like Alsace, Bordeaux, and Champagne. That tendency is largely based on the fact that wine drinkers count on getting a wonderful tasting bottle of wine if it comes from a certain region.

However, the taste of wine depends very much on the grape or grapes used in the winemaking.

Cabernet Sauvignon (ca-ber-NAY so-vin-yawn) is the name of the wine, as well as the grape, which is famous for being one of the world’s finest red varietals.

Characteristics – Deep red in color, Cabernet is a beautiful medium to full-bodied, dry wine. It has a hearty, complex flavor evoking thoughts of black currants and blackberries. Traditionally, the wine is aged in oak, which gives it an oaky, vanilla flavor. It has a particularly smooth, fine finish. Higher quality Cabernet ages very well for decades.

While perfect all by itself, Cabernet is frequently blended with the red wine types of Merlot, Shiraz, and Sangiovese.

Growing Regions – Cabernet grape vines are very durable and adapt well to a variety of climates. This grape is grown in wine-making regions all over the world, including, Australia, Chile, France, Canada, and northern California.

Merlot (Mer-LO) has become increasingly popular over the last 10-15 years. Due to its mellow taste and low acidity it is a good choice for those new to drinking red wine. Merlot is the name of the wine and the grape.

Characteristics – Merlot is considered a bit softer and less tannic than other red wine types, like Cabernet. However, it’s still a complex wine, with rich, chewy flavors of plum and blackberry and hints of cherry and orange. Merlot is not suited for extended aging and is typically consumed immediately.

Merlot is an outstanding grape in a stand-alone wine, as well as when blended with other grapes, particularly Cabernet.

Shiraz (shih-RAZ) and Syrah (Sih-rah) are names for the same grape, with Syrah being used by European vintners. (It shouldn’t be confused with the Petit Sirah, a completely different grape.)

Characteristics – One of the darkest reds, Shiraz can be made as a fruity, sweet wine with plumy flavors or a dry peppery wine with notes of blackberries, licorice, and chocolate. Hints of toffee come from the wine’s aging in oak barrels.

Shirazcan be consumed immediately or aged up to 5 years.

Shirazis frequently blended with Grenache and Cabernet grapes to make some fine wines.

Growing Regions – While the Shiraz grape most likely originated in the Rhone Valley of France where it has been used as a blend with other wines, it is Australia’s most widely grown grape and has thus become known as an “Australian” wine. However, Shiraz is also made in South Africa, as well as in some U.S. wineries.

Shirazgrapes cultivated in warmer temperatures tend to have softer plum flavors, while cooler climates give the grape spicy or peppery qualities.

Characteristics – Malbec grapes make a mid-bodied, rustic red wine, dry, with high acidity. Due to its acidity, it is most often blended with other wines.

Growing Regions – Malbec is Argentina’s most popular grape variety and is widely grown there. It is also grown in Chile, Australia, and northern California.

Pinot Noir (Pee-no na-wahr) is a delicious red wine made from a variety of black grapes that were originally grown in France’s Burgundy region. Some connoisseurs believe that these grapes make some of the finest wines in the world.

Characteristics – Pinot Noir is a challenging grape to grow, but with the right conditions, it produces an outstanding, complex wine. The wine is light to moderate in body, fresh, and delicate. It comes in an array of colors, from purplish-red to cherry-red, even turning brown during aging. It’s an earthy wine with varying aromas and flavors rich in worn leather, tea-leaves, oak, vanilla, and jammy, such as strawberry, raspberry, and plum.

Many Pinot Noirs are meant to be immediately consumed, but a good quality Pinot Noir can age for over 10 years.

It’s a stand-alone grape that is rarely blended with other grapes. However, Pinot Noir grapes grown in California are often used in rose wine types and champagnes.

Growing Regions – Pinot Noir grows best in cooler climates and is found in the vineyards in California and Oregon, as well as in Austria, and New Zealand.

Zinfandel (Zin-fen-del) is one of the “American Classic” wine types, although the grape originated in Croatia and was initially made famous in Italy during the Roman Empire. Zinfandel came to California during the early 1800’s and there it has flourished into one of the world’s most versatile grapes. It’s used to create many wine types, from a rich red to a crisp white to a light blush.

Characteristics – Red Zinfandel wine is deep red in color, bordering on black. It’s a spicy, peppery, heavy wine with a hint of jammy or fruity flavors and aromas, evoking thoughts of blackberries and dark cherries.

Red Zinfandel is best consumed within a year or two, but some mellow well with age.

Growing Regions – Zinfandel is only grown in California.

Sangiovese (Sanjo-vay-zee) is at the center of Italian Chianti wines, traditionally brought to the table in a “basketed” bottle, and served with pastas covered in rich red sauces.

Characteristics – Sangiovese is a black grape that creates medium-bodied red wine types that can be beautiful and complex, evoking various fresh and fruity flavors and aromas.

Many wines made with Sangiovese grapes age well for almost 10 years.

Growing Regions – Grown as the “signature” grape of Tuscany and Chianti regions of Italy, it is cultivated elsewhere with limited success. However, some vines are grown in California.

Chardonnay (Shar-don-nay) is a white grape used to make buttery, still wines, sparkling wine types and Champagne. It is the most popular white wine.

Chardonnay is loved by winemakers for its ease in growing and high yield and wine drinkers love it for its wide range of tastes.

Characteristics – Chardonnay wines tend to be voluptuous, velvety, and dry. Its citrus flavors, like lemon and grapefruit, and fruity melons are complemented with those of its oak barrel fermentation, including rich, creamy, buttery tones and hints of vanilla and toast.

Chardonnay can taste semi-sweet or tangy, light or heavy, depending upon where the grapes are grown and how it’s aged.

Most chardonnays are made for immediate consumption but some age nicely for 5-10 years.

Chardonnays cultivated in cooler climates result in subtle overtones and those in warmer temperatures tend to be fuller and more flavorful.

Sauvignon Blanc (So-veen-yawn Blah) is a white wine, aka “Fumé Blanc” as it’s sometimes called in the United States, a name created by Robert Mondavi to highlight the wine’s smoky flavors. The wine’s flavor and aroma can vary quite a bit depending on the growing region and fermentation process.

Characteristics – Sauvignon Blanc aromas and flavors can be smoky (light), herbal, grassy, with suggestions of bell peppers. It can also run the gamut, from evoking thoughts of unripe fruit, such as pears or apples to tropical fruits, like mangos, melons, and blackcurrants. It is typically a very light wine that tends to be acidic and crisp.

The grape is frequently blended with others, including Semillon.

Sauvignon Blanc should be consumed within a few years of production.

Growing Regions – Sauvignon Blanc is grown in France’s Bordeaux region, its place of origin, where it is blended with the dry Semillon grape. Other growing areas include New Zealand and Australia.

Moscato (Mus-ket-o) is from the family of Muscat grapes, and is a common sweet, white grape. It is known by several names, like Muskateller, Muscat Canelli and Muscat Blanc. As its name might suggest, the wine types made from this grape tend to have a musky flavor.

Muscatis used in the well-known sparkling, sweet wine from Italy – Asti Spumanti. Due to the grapes sweetness it is often used to make dessert wines.

Characteristics – Muscat has a musky aroma with a citric or grapefruit flavor that is frequently sweet; a very distinct taste.

The white Pinot Grigio grape is actually a mutation of the red Pinot Noir grape.

Pinot Blanc is a further mutation of Pinot Noir and is not the same wine as Pinot Grigio or Pinot Gris.

Characteristics – Wine made with these grapes can vary greatly in flavor, depending upon where they are grown, although they all have the characteristic mineral flavor. Italy’s Pinot Grigio usually is dry and light, but not sweet. California wines tend to have a richer flavor, finishing with citrus, such as lemon. French wine types tend to be more flowery and fruity, with flavors and aromas ranging from melon to grapefruit to peach.

Pinot Grigio is typically a dry, crisp wine with an acidic bite.

Some Pinot Grigio wine types improve with a few years of aging.

Growing Regions – Pinot Grigio is most extensively grown in Italy, as well as in California and Oregon, Germany, Austria, and Australia.

Characteristics – Gewürztraminer tends to be sweet white wine, which is sometimes dry. The aroma is an interesting mixture of spice and flowers. It is not deemed as lively as other wine types.

Some Gewürztraminers benefit from aging of 2-4 years.

Growing Regions – Gewürztraminer is grown in Germany, Alsace (France), and in smaller amounts in the U.S. West Coast, New York, and Australia.

Riesling (Rees-ling) is a white grape that is known by many names, such as Weisser Riesling, Riesling Renano, Rheinriesling, and Johannisberg Riesling. Rhine Wine is a Riesling.

Characteristics – Lighter than a Chardonnay, Riesling wines are typically complex and sweet wine types with aromas of fresh apples, florals, and honey. Some are musky and dry. The wine varies, depending upon the region. California Rieslings are dry with a melon taste, while German Rieslings tend to be more tart and citric.

Growing Regions – Riesling is a late-ripening white wine grape that produces a moderate yield. It can be quite difficult to grow. It does the best in Germany and in California, but is also grown in the Alsace region of France, in Austria, Australia, Canada, and New Zealand.

White Zinfandel is made from the same red grape used to make Red Zinfandel. Winemakers peel the red skins off the grapes to make a lighter wine with a sweet flavor. This process also removes the heaviness associated with red wine types. Incidentally, this is the process used to make blush wine types.